Raising capital for your next venture can be a major hurdle on the road to bringing your vision to life.

While bank loans and pitching to traditional investors are still viable fundraising options, crowdfunding gives you the opportunity to solicit support from the crowd: a group of individuals who collectively invest in your idea to make it a reality.

What’s more, crowdfunding can also give entrepreneurs a way to validate demand for their ideas, before they enter production, by letting others “buy into it” with pre-orders, donations, and investments.

It is a strategy that focuses on raising smaller amounts of money from a larger collective of individuals.

These backers can be offered a number of incentives in exchange for their support:

While every crowdfunding site has its own unique features, platform fee and overall fee structure, and user base, the core concept is the same—you submit your project to the platform with a fundraising goal and a deadline, and then campaign for support online, often through social media. 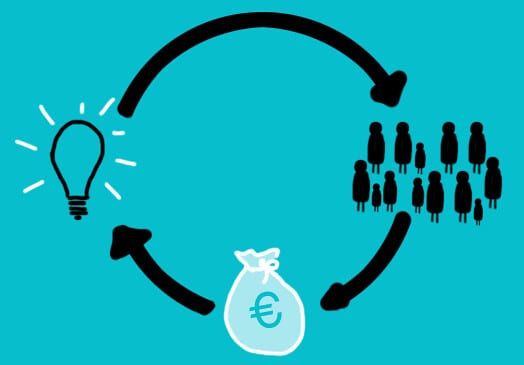 This question is rather subjective—the “best” platform is not something that can be said with certainty; it all depends on your individual circumstances and the needs of your business.

Here are some of the most popular platforms.

Kickstarter is one of the biggest names when it comes to crowdfunding, known for helping tech and creative entrepreneurs fund their projects before getting a loan or raising money for venture capital. The company has raised over $4 billion with more than 155,000 projects funded since its inception in 2009. Potential funders can browse several verticals from arts and film to publishing.

Indiegogo users are usually creating campaigns for tech innovations, creative works, and community projects. The crowdfunding platform works similarly to Kickstarter, except it doesn’t have an exclusively all or nothing fundraising model.

Users choose between two options: fixed and flexible funding. Fixed is best for fundraisers where your project needs a certain amount of money while flexible is good for campaigns where you’ll benefit from any funding. With flexible funding, you will get your funds whether or not you meet your goal; with fixed funding, all funds are returned to your donors if you do not meet the campaign goal.

Another popular crowdfunding platform, Patreon sets itself apart with its subscription model. Patreon is extremely popular with YouTube channels. In fact, this is where much of Patreon’s custom comes from.

Instead of being for straight-up campaigns, this is more for providing ongoing financial support for a creative venture or artist. There’s also the option to provide content exclusive to patrons who are subscribed to your Patreon through the site itself.

RocketHub is for entrepreneurs who are looking for venture capital for their art, business, science, or social good project. It has an ELEQUITY Funding Room, where you can pitch your idea and garner interest from donors. In this space, you’ll also be able to receive specific feedback on how to run a successful campaign.

On top of that, being a RocketHub member helps you connect with funders and other start-ups, as well as advertise and promote your company. The crowdfunding site has received endorsements from big names such as Bill Clinton and Bill Gates and has also worked with the U.S. Department of State.

Crowdfunder has a straightforward name, which matches what it’s for. Crowdfunder lets you sell equity and debt in your business to attract angel investors and venture capitalists to raise money for your projects.

It’s like a regular venture capital program, but with the online infrastructure to raise awareness usually beyond smaller business’ means.

Due upon receipt: What it means and how to deal with it

All you need to know about working capital ratio